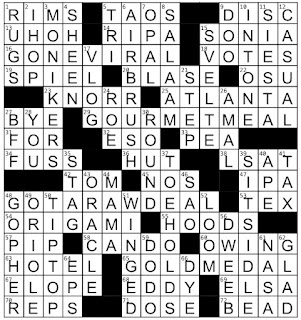 Theme Answers:
GONE VIRAL (16A: Broken the internet)
GOURMET MEAL (29A: Master chef's creation)
GOT A RAW DEAL (48A: Wasn't treated fairly)
GOLD MEDAL (65A: Prize for first place)
Theme synopsis: The word GOAL is STRETCHed by each theme answer, with the letters GO- appearing at the beginning of the answer, and the letters -AL at the end.
Things I learned:
Random thoughts and interesting things:
Geography review:
A common theme type today with the word GOAL bookending a nice set of theme answers. Smooth fill all around, and some lovely non-theme answers, including MONIKERS, AIRBRUSH, SVELTE, ORACLE, and TOE HOLDS. This puzzle was a TIPTOP way to begin my Sunday morning.
If you are participating in the Boswords Summer Tournament today, good luck and perhaps I'll see you in the chat stream!
Zhouqin Burnikel