Title: CALL ME BY YOUR NAME 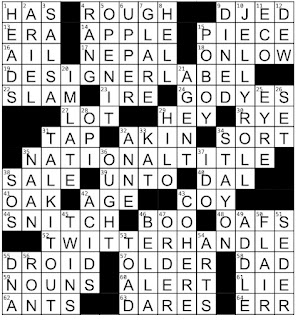 Theme Answers:
DESIGNER LABEL (19A: High-end fashion brand)
NATIONAL TITLE (35A: Stanford basketball won one in April 2021)
TWITTER HANDLE (52A: Username after an @)
Theme synopsis: The last word of each theme answer is a synonym for NAME: LABEL, TITLE, HANDLE.
And now a word from our constructors:
Brooke & Enrique: We love this puzzle so much! It was very fun to build a theme around this title and even more fun to collaborate. We love all the music we got to include in addition to the "theme song" — Fiona APPLE, Lizzo's Good as HELL, JELLY ROLL Morton, ABBA's SOS — even ERR is musical. We also love DOG dad and the TWINS clue — fittingly, we each independently had the same idea for cluing it. 👯
Things I learned:
Random thoughts and interesting things:
Geography review:
"Montero (CALL ME BY YOUR NAME)" is a song by Lil Nas X that previewed in February 2021 during a Super Bowl LV commercial. It's appropriate that a puzzle with title based on a song title is jam-packed with music references. I enjoyed them all. TWITTER HANDLE was my favorite of the theme answers. I hope the person displaying their IRE with a door SLAM is able to TALK IT OUT. This puzzle was a lovely way to begin my Tuesday, and provided me with multiple earworm options for the day.
Brooke Husic Enrique Henestroza Anguiano