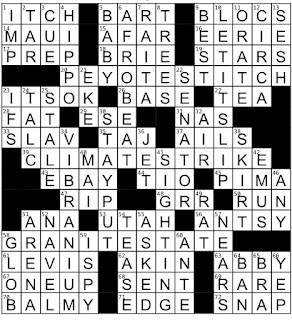 Theme Answers:
PEYOTE STITCH (20A: Beading technique with a plant in its name)
CLIMATE STRIKE (39A: Fridays for Future demonstration)
GRANITE STATE (58A: Rocky nickname for New Hampshire)
Theme synopsis: Hidden in each theme answer - in the MIDdle of the two TERMs in each answer - we find the word TEST.
And now a word from one of our constructors:
Brooke: We built this puzzle around CLIMATE STRIKE and the title came later, after a lot of riffing — I think it's perfect! I honestly can't pinpoint what fill and clues I like best because I love it all. I also love that it's running on a Friday given the central clue! I can't believe this is my 50th USAT puzzle. I'm so privileged to be seeing you several more times this month, and ecstatic to start it off with this puzzle — xoxo 😘
Things I learned:
Random thoughts and interesting things:
Geography review:
How about a pop quiz on Friday? This type of surprise TEST is an enjoyable version fortunately. A nice set of theme answers here. I also liked the non-theme answers of LET IT SLIP and STAY PUT. A fun clue for SIGHTING (41D: Source of excitement for a ufologist). And congrats to Brooke Husic on her 50th USA Today puzzle! You can reminisce over most of Brooke's previous puzzles here. (Her first seven USA Today puzzles preceded Sally's Take.) Brooke also co-constructed today's New York Times puzzle with Adam Nicolle, so check that out for a little more of a challenging solve. This puzzle was a delightful way to begin my Friday.
Brooke Husic Erik Agard