Title: I AM AN AMERICAN 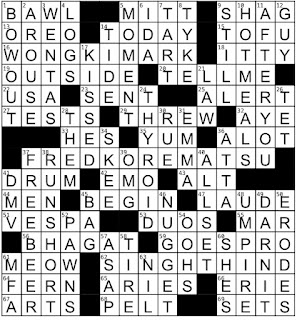 Theme Answers:
WONG KIM ARK (16A: Person in an 1898 case affirming birthright citizenship)
FRED KOREMATSU (37A: Person in a 1944 case contesting the internment of Japanese Americans)
BHAGAT (56A: With 62-Across, person in a 1923 case challenging citizenship eligibility)
SINGH THIND (62A: See 56-Across)
USA (22A: Country of citizenship for 16-, 37- and 56/62-Across, for short)
EMMA (31D: ___ Gee, cofounder of the AAPA, which popularized the term "Asian American")
Theme synopsis: The first three theme answers are people who have played important roles in the establishment of U.S. citizenship rights for Asian Americans.
And now a word from our constructors:
Erica: This is my first crossword to go out into the world! Woohoo! Thank you to Kim for coming up with this powerful theme idea and bringing me on board. We had the challenge of making sure we had extra clean fill so that folks who were unfamiliar with the theme names could still complete the puzzle. Hopefully some folks learned about these important figures in US history.
I am passionate about expanding diversity in crossword grids, and last year I started the Expanded Crossword Name Database, which is a crowd-sourced, free, public, and semi-regularly updated database filled with names of women, non-binary, trans, and/or people of color, as well as "places and things" (organizations, works of art, monuments etc) that represent groups/identities/people that are often excluded from crossword grids. Please check it out if you haven't already, and keep contributing new entries. Oh, and I love crossword friends and collaborations, so come find me on twitter @ewojcik!
Kim: Crosswords are primarily a pastime, of course, but as many in Crossworld have said more eloquently than me - including my co-constructor Erica - crosswords also represent a shared culture and understanding, an explicit choice about who and what is important and worth knowing. So while most of the puzzles I have a hand in constructing are a little lighthearted or tricky, every once in a while, it's nice to have a puzzle that speaks to something a little bit more.
For API Heritage Month, I'm happy to be part of the team to bring you this puzzle, titled after Dorothea Lange's iconic photo from 1942 Oakland. For me, this puzzle was, in part, an attempt to sublimate my feelings about the last year. Specifically, that while the fight to say that API folks belong in this country is old and hard, our elders have paved the way; their stories are important and worth knowing. Special thanks to my fabulous co-constructor Erica Hsiung Wojcik for helping bring this into the world, and Erik Agard for lending us his platform to make it happen.
As for the construction bits, this was a great lesson in what to do when your good themeset is not automatically symmetrical, and does not fit into a 15x15. Kudos to Erica for the brilliant idea of offset-stacking BHAGAT across SINGH THIND so that it reads really naturally (my original inelegant suggestion was a corner vertical 6 in the SW in a different configuration). I will also say that normally, one might try to construct your way out of those big open corners that the center 13 creates, but the possibilities that Erica came up with during the constructing process (including a truly fire I CONFESS/TRADE YOU stack in the NE that had to make way to make the N less clunky) convinced me this was the grid for us.
Things I learned:
Random thoughts and interesting things:
Geography review:
Sometimes when you solve a crossword, you end up getting a bonus history lesson! As I mentioned earlier this month, May is Asian American and Pacific Islander (AAPI, or API) Heritage Month. Today we have another puzzle recognizing AAPI heritage. I appreciated that Kim and Erica took care to make crossing answers fair for solvers unfamiliar with the names in the puzzle. As I mentioned above, only one of the names was familiar to me, but I was able to fill in all of them without problems using crossing answers. I liked the consistency of the theme, that all of the theme answers were persons involved in Supreme Court cases concerning citizenship of Asian Americans. I appreciated learning about these people. I tried to include multiple links in my summaries above, so if you're interested in learning more, you'll have a place to start. Oh, and if you aren't familiar with Dorothea Lange's photo that inspired the title of the puzzle, I encourage you to take a look at that as well. Also, congratulations to Erica on her first published crossword! This puzzle was an informative and enjoyable way to begin my Monday!
Erica Hsiung Wojcik Hoang-Kim Vu