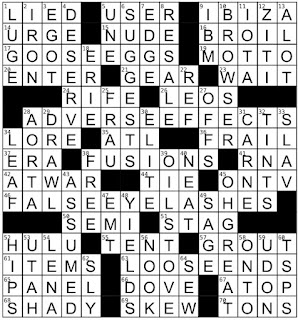 Theme Answers:
GOOSE EGGS (17A: Big ol' zeros)
ADVERSE EFFECTS (28A: Undesired consequences)
FALSE EYELASHES (46A: Extensions you can bat)
LOOSE ENDS (63A: Things to tie up)
Theme synopsis: Take a LOOK at each theme answer, and INSIDE each one you will find the word SEE bridging the two words in the answer.
Things I learned:
Random thoughts and interesting things:
Geography review:
My favorite theme answer today was FALSE EYELASHES. I SEE what you did there! I also chuckled that the puzzle's theme started out with nothing in the form of GOOSE EGGS, but by the end of the puzzle, all the LOOSE ENDS had been tied up. No ADVERSE EFFECTS from today's theme - enjoyable all around, and a delightful way to begin my Wednesday.
Zhouqin Burnikel