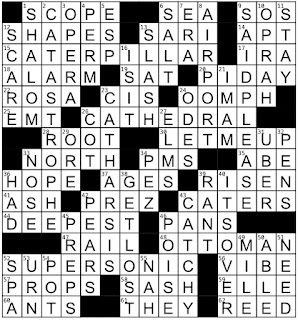 Theme Answers:
CATERPILLAR (15A: Future butterfly)
CATASTROPHE (2D: Total disaster)
CATHEDRAL (26A: St. Louis ___ (New Orleans landmark))
CATHARSIS (23D: Emotional release)
CATERS (43A: Provides food for an event)
CATCHY (43D: Like a song you might start humming unintentionally)
Theme synopsis: Each theme answer begins with the letters CAT. The CATs meeting in the grid, intersecting along the diagonal line of symmetry and forming a "KITTY CORNER."
And now a word from our constructors:
Mollie: This is my first foray into the world of diagonal symmetry, and I had so much fun exploring it with Brooke aka the *queen* of diagonal symmetry. I'm especially enamored of how this theme she dreamed up takes advantage of the "corners" that are created along the diagonal axis. Outside of the theme, I like how LET ME UP and GET LOST occupy symmetric slots as sort of opposite sentiments (which I'm only noticing now as I write these notes). Other bits I especially dig are SAID PLEASE, IT'S OVER, and Brooke's clue for HAD ["You ___ one job!"]. Hope you enjoy, and look out for more from us down the road!
Brooke: I'm beyond honored to collab with Mollie and am a huge fan of her amazing puzzles. It was so fun to make this grid together! After we settled on some theme answer options Mollie set up the layout. I also wonder if we're writing a hidden saga here which starts with LET ME UP and not only a request to GET LOST but the assertion that IT'S OVER. I really like the northwest corner of the grid, and I also love Mollie's clues for CATHEDRAL and ELLE and IS IT (I always have the hardest time cluing IS IT) and especially CATCHY (a perfect clue imo). If you want to see some of Mollie's masterwork with trickier clues you should check out her Inkubator puzzle that just dropped yesterday!
Things I learned:
Random thoughts and interesting things:
Geography review:
This puzzle has diagonal symmetry; it is symmetrical along a diagonal axis extending from the upper left corner to the lower right corner. It was fun to see the theme play on this, with the KITTY CORNERS formed along the line of symmetry. I also liked how the CAT intersections progressed, beginning with a T-intersection, then intersecting at the A, and finally a C-intersection. The theme answers are CATCHY words, too. I'm particularly a fan of CATHARSIS and CATASTROPHE. The VIBE of this puzzle is far from a CATASTROPHE. I enjoyed answers such as SUPERSONIC, IT'S OVER, OOMPH, and SAID PLEASE. This puzzle was a delightful way to begin my Friday.
Brooke Husic Mollie Cowger