Title: END OF THE ROAD 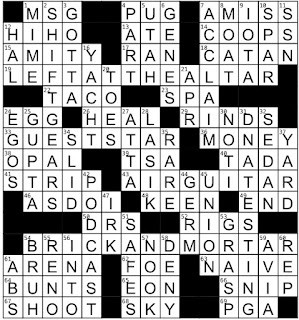 Theme Answers:
LEFT AT THE ALTAR (19A: Broke up with, in a way)
GUEST STAR (33A: Actor who's not part of the regular cast)
AIR GUITAR (43A: Imaginary instrument)
BRICK AND MORTAR (54A: Like a store that's not just online)
Theme synopsis: TAR, something that is part OF THE ROAD, is found at the END of each theme answer.
Things I learned:
Random thoughts and interesting things:
Geography review:
This is a lovely set of theme answers, particularly the jilting LEFT AT THE ALTAR and the playful AIR GUITAR. A couple of nice long bonuses in SHIFT GEARS and DNA TESTING. Nice cluing and answers all around made this an enjoyable way to start my Thursday.
Hannah Slovut