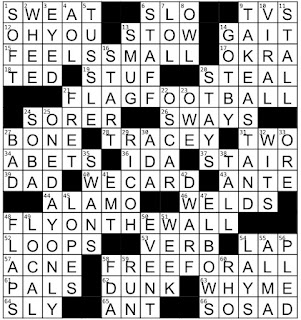 Theme Answers:
FEELS SMALL (15A: Experiences a sense of inferiority)
FLAG FOOTBALL (21A: Relative of two-hand touch)
FLY ON THE WALL (48A: Unnoticed observer)
FREE FOR ALL (58A: Chaotic situation)
Theme synopsis: The word FALL has come APART in each theme answer, with the F- at the beginning of the answer, and the -ALL at the end.
Things I learned:
Random thoughts and interesting things:
Geography review:
Sometimes when I am solving a puzzle, the answers tell me a story that is not necessarily related to the puzzle's theme. Today was one of those days.
WHEE! The store's much-anticipated ONE DAY SALE quickly turned into a FREE FOR ALL. More than one TUSSLE broke out as customers used their ELBOWS to push each other aside and take advantage of low prices that were almost a STEAL. The STAFF was SO SAD as they EYED the SMUG LOCALS START to wreak havoc. One employee, who kept her WITS about her, decided to TAKE A STAND and put an end to the BAD day. She locked the doors, PLED with people not to FRET, and said, "I will let you out when you pay what you OWE." Although standing TALL, inside she was wondering, "WHY ME?" I wish I had been a FLY ON THE WALL at this EVENT.
Apparently I'm going to have a wacky Wednesday; this puzzle was a great way to begin it.
Zhouqin Burnikel