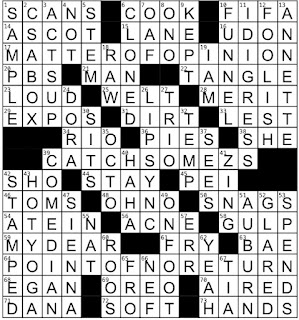 Theme Answers:
MATTER OF OPINION (17A: Something debatable)
CATCH SOME Z'S (39A: Sleep)
POINT OF NO RETURN (64A: Last chance to turn back)
Theme synopsis: The first WORD of each theme answer can complete the phrase, "WHAT'S THE ___?" WHAT'S THE MATTER? WHAT'S THE CATCH? WHAT'S THE POINT?
Things I learned:
Random thoughts and interesting things:
Geography review:
When I first started this puzzle, I thought WHAT'S THE WORD? was going to describe my solving experience - apparently my tired brain needed to CATCH SOME Z'S! It's a MATTER OF OPINION, but I loved this theme. I admit it took me a few minutes after I completed the puzzle (THE POINT OF NO RETURN?) to figure it out, which led to a lovely "Aha!" moment. There are many enjoyable non-theme answers here, too. In addition to those I highlighted above, I liked FOOLISH, HOT YOGA, and CLONED. The cluing was great, too! Congratulations to constructor Rebecca Goldstein on her USA Today debut! This puzzle was a delightful way to begin my Monday.
If you're in the mood for more solving, I constructed today's Universal crossword. It's titled, "Growing a Garden."
Rachel Fabi Rebecca Goldstein