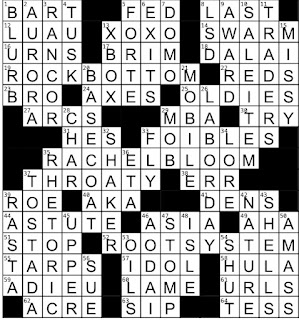 Theme Answers:
ROCK BOTTOM (19A: Absolute lowest point)
RACHEL BLOOM (35A: "Crazy Ex-Girlfriend" co-creator and star)
ROOT SYSTEM (52A: Plant network below the soil)
Theme synopsis: Each theme answer BREAKs the word ROOM, with some letters of the word appearing at the beginning of the answer, and the remaining letters appearing at the end.
And now a word from our constructor:
Evan: This idea stemmed with 35-Across, and I was pleased to include one iteration of each internal split. 46-Down was brought to my attention as part of one of Erik’s puzzles last year. It was fun working with those wide-open corners.
Things I learned:
Random thoughts and interesting things:
Geography review:
If you're feeling like you need a BREAK, this puzzle has a ROOM for you. I appreciated that the theme answers represented all of the possible BREAKs of the word ROOM. I also enjoyed the answers RHETORIC, and RANCOR. I thought the clue for STOMP (47D: Walk like the Hulk) was rather fun! This puzzle was an enjoyable way to begin my Saturday.
If you're in the mood for more puzzling, I constructed today's Universal crossword, "Shifting Gears."
Evan Kalish