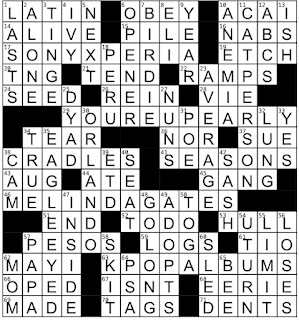 Theme Answers:
SONY XPERIA (17A: Android smartphone line)
YOU'RE UP EARLY (29A: Comment to a night owl at the breakfast table)
MELINDA GATES (46A: "The Moment of Lift" author)
K-POP ALBUMS (63A: "Map of the Soul: 7" and "Blackpink in Your Area," e.g.)
Theme synopsis: Each theme answer contains a HIDDEN GEM. Looking closely, we find ONYX, PEARL, AGATE, and OPAL.
Random thoughts and interesting things:
Geography review:
I enjoyed this puzzle's theme, and especially liked that each theme answer contained a different HIDDEN GEM waiting to be discovered. As I mentioned above, K-POP ALBUMS is my favorite theme answer, though I liked them all. I also appreciated the visual of MOM and PAPA being placed together in the lower left corner of the puzzle. I liked the answer EAGLE-EYED, but it's hard to compete with CAT PERSON. That was definitely my favorite answer in the puzzle. This puzzle was an enjoyable way to begin my Friday.
A brief note about yesterday's write-up: I've edited it to add more information about the theme. I'm always grateful when readers let me know things they've noticed which I have missed!
Olivia Mitra Framke