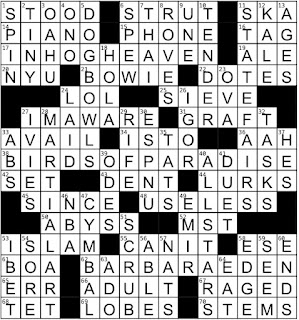 Theme Answers:
IN HOG HEAVEN (17A: On cloud nine)
BIRDS OF PARADISE (38A: Flowers named for a flying creature)
BARBARA EDEN (62A: "I Dream of Jeannie" actress)
Theme synopsis: The last word of each theme answer is a synonym for SHANGRI-LA: HEAVEN, PARADISE, EDEN.
Things I learned:
Random thoughts and interesting things:
Geography review:
Did you feel like you were in PARADISE while solving this puzzle? The top center of this puzzle gave me some fits, so I had a few non-SHANGRI-LA moments. For some reason, I had trouble coming up with IN HOG HEAVEN. I kept wanting it to be "IN HIGH HEAVEN," which of course didn't fit. Once that got sorted out, everything was once again HEAVENly. This puzzle was an enjoyable start to my Wednesday.
Zhouqin Burnikel