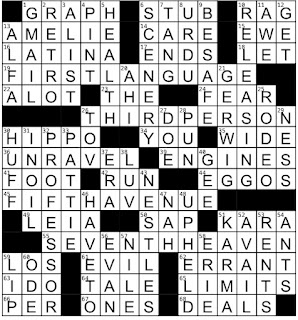 Theme Answers:
FIRST LANGUAGE (19A: Native tongue)
THIRD PERSON (26A: Zie or she, in grammar)
FIFTH AVENUE (45A: Noted NYC shopping area)
SEVENTH HEAVEN (55A: Extreme bliss)
Theme synopsis: Each theme answer begins with an ordinal number that relates to an ODD number.
Things I learned:
Random thoughts and interesting things:
Geography review:
I enjoy order, so it's no surprise that I liked the nice orderly theme progression from FIRST LANGUAGE to THIRD PERSON to FIFTH AVENUE to SEVENTH HEAVEN. Quite nice. I really enjoyed the cluing today. In addition to those I've highlighted above, I liked the clues for ENGINES [Car parts that roar and purr], FOOT [Body part with an arch], and HUFF [Word in the Big, Bad Wolf's threat]. With clues referencing Cherry Garcia and York Peppermint PATTIEs, I may have to go find myself a sweet treat when I'm done writing this! Solving this puzzle was a delightful way to start my Thursday.
Claire Rimkus