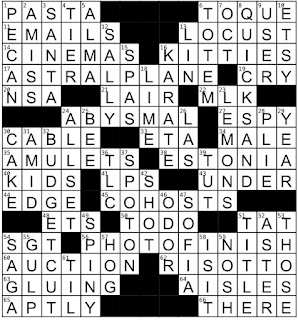 Theme Answers:
ASTRAL PLANE (17A: Realm for spirits)
PHOTO FINISH (56A: Conclusion of a neck-and-neck race)
QUICKSAND (8D: Adventure film hazard)
BUDGET CUT (32D: Spending reduction)
Theme synopsis: The last part of each theme answer is a WOODWORKING action. You might CUT, PLANE, SAND, or FINISH your wood.
And now a word from our constructor:
Evan: This puzzle was inspired by a skill I wish I had! I’d love to make more stuff with my hands, and four of the steps in creating some homemade awesomeness yielded the nice little set here. I thought it would be fun to change things up and create a pinwheel grid. Bumping the 11-letter theme entries inward (to rows 4 and 12, instead of 3 and 13) enabled this fun design, and I enjoyed working with those wide-open corners.
I was thrilled with several of the cluing references, including 5-Down (she had a really fascinating segment on “60 Minutes” a bit back), 22-Across, and 16-D. I also enjoyed writing the clues for 52-D and 53-D.
Things I learned:
Random thoughts and interesting things:
Geography review:
I liked this WOODWORKING-themed puzzle. As you could probably tell, QUICKSAND was my favorite theme answer. I also enjoyed the mini-birthday theme, the paired clues for LIME and LEMONS, and seeing SALLY in the puzzle. Solving this puzzle was a fine way to begin my Saturday.
Evan Kalish