Title: PASS IT ON 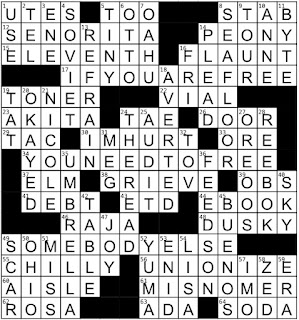 Theme Answers:
IF YOU ARE FREE (17A: With 34- and 49-Across, Toni Morrison quote)
YOU NEED TO FREE (34A: See 17-Across)
SOMEBODY ELSE (49A: See 17-Across)
Theme synopsis: In an interview for the November 2003 issue of O, The Oprah Magazine, Toni Morrison talked about mentorship, and encouraging her students to PASS IT ON: "IF YOU ARE FREE, YOU NEED TO FREE SOMEBODY ELSE."
Things I learned:
Random thoughts and interesting things:
Geography review:
Writer, professor, and Pulitzer Prize winner Toni Morrison was born February 18, 1931 in Lorain, OHIO, making today her 90th birthday. (Morrison died in 2019 at the age of 88.) Today's puzzle is a lovely tribute to her. It's a quote puzzle! There are many people who do not like quote puzzles. (Actually, "do not like" is a bit of understatement of the feeling of some people towards quote puzzles.) The argument against them is usually along the lines that the quote cannot be filled in (unless you just happen to know it) without the aid of crossing answers. IMO (in my opinion), quotes are a perfectly acceptable theme. I enjoy using crossing answers to deduce the quote, just as I do with any answer in a puzzle that I don't immediately know. From a technical aspect, it's not as easy as you might think to construct a quote puzzle, as the quote has to be able to be broken into symmetrical pieces that fit logically in the grid. Today's quote is a fantastic choice. It's inspirational and challenging. Here's more of the quote: "When you get these jobs that you have been so brilliantly trained for, just remember that your real job is that IF YOU ARE FREE, YOU NEED TO FREE SOMEBODY ELSE. If you have some power, then your job is to empower somebody else. This is not just a grab-bag candy game." In celebration of Toni Morrison's birthday, I challenge you to consider who you are empowering. Who are you working to free? This puzzle was a delightful way to begin my Thursday. Happy 90th birthday, Toni Morrison!
Erik Agard