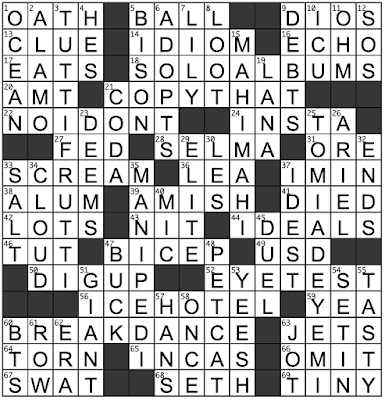 Theme synopsis: Each themer is a two-word phrase in which both words end in "i" – since they're vertical in the grid, the "i"s are "kept low" at the bottom of each word in each themer.

And now a word from our constructor:

Paolo: seeded this puzzle after TOMI ADEYEMI did a talk for a school program, which was so good that as soon as it finished, i immediately messaged erik and queried a theme with her name. all this is to say thank you tomi, thank you erik, and read children of blood and bone

Happy Monday y'all! It's snowing here in St. Louis, so it's the perfect morning to stay inside and sub in on my favorite puzzle blog. I was especially thrilled to see Paolo's byline when I opened my computer this morning – I knew I was in for a puzzle full of fun! I love the visual of the theme entries dropping down through the grid, and the surrounding stuff (shoutouts to BREAKDANCE / SOLO ALBUMS / INSTA / BISON) all put a smile on my face. If I could borrow Sally's "delightful" stamp, I would use it to cover this puzzle. Thanks for reading, and have a warm, enjoyable day!
-Matthew
Paolo Pasco