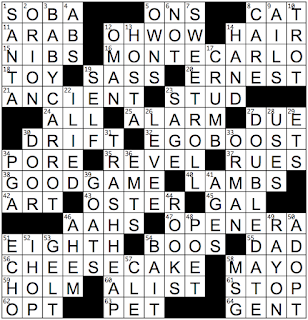 Theme Answers:
BABY CARROT (3D: Common veggie tray item)
SWEET ROLL (7D: Glazed breakfast bun)
DOULE DATE (27D: Outing for two couples)
TRASH HEAP (31D: Garbage pile)
Theme synopsis: Each answer begins with a word that can precede TALK: BABY talk, SWEET talk, DOUBLE talk, TRASH talk. The theme answers are vertically oriented; hence "TALK DOWN."
Things I learned:
Random thoughts and interesting things:
Geography review:
Hi everyone! You've seen me before as a constructor and for this and the next two Sundays you'll see me on here covering for Sally. I have a blog with pretty hard puzzles and I'm on Twitter. In my "real life" I do biophysics research.
TALKing DOWN to someone is unpleasant, but this puzzle was anything but! I always love Burnikel puzzles and really admire her craft, and as a constructor I'm in awe of her consistently great themes. I was happy to learn about Kani salad and the uses of SAGE, and I really enjoyed the cluing. Speaking of being in awe, I'm super in awe of Sally for doing this every day! It was a really thorough case study of a puzzle for me and I looked up many more topics than I normally do. It took me longer to write this post than it does for me to clue an entire USA Today puzzle! Maybe I'll get faster after doing it two more times this month.
xoxo, Brooke
Zhouqin Burnikel