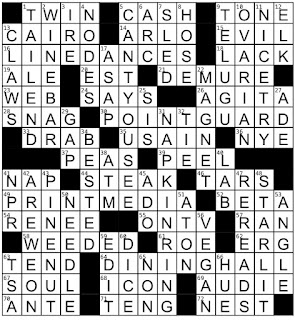 Theme Answers:
LINE DANCES (16A: The Wobble and the Electric Slide)
POINT GUARD (30A: Position played by Courtney Vandersloot)
PRINT MEDIA (49A: Papers and magazines)
DINING HALL (64A: College cafeteria)
Theme synopsis: The first word of each theme answer can follow the word FINE, giving us FINE LINE, FINE POINT, FINE PRINT, and FINE DINING.
And now a word from our constructors:
Brooke: There's a type of playful clue seen in indie puzzles and some publications that uses an exclamation point to indicate it should be interpreted differently than a straightforward clue. Matthew introduced me to this kind of clue back when we started collaborating last spring, and he's amazing at writing them. For example, one Matthew wrote that I love is the clue [Pick me!] for the answer NIT. To anyone keeping tabs on our collaborations for the USA Today, we've clearly followed a trend, with this puzzle completing the trifecta that started with It's Lit! and was followed by It's Magic! (admittedly, they're not totally consistent, as the former theme was based around objects that can be lit on fire, whereas the latter theme and today's involve words that can precede the openings to the theme entries). It's an absolute joy to work with Matthew and to learn from him, and it's 100x more of a joy to be his friend. I hope you're on the edge of your seat for how we'll handle the title of our next USA Today collaboration.
Matthew: Making puzzles with Brooke is always more fun than making puzzles solo, and this most recent installment in the “It’s ___!” USA Today series was certainly no exception. Truly, the “!” at the end of each of our USA Today titles doesn’t do justice to how HYPE we get for these puzzles, and how much we enjoy putting them together (though it’s a good place to start!). Brooke’s fierce thoughtfulness makes her such an amazing friend in addition to a brilliant puzzle constructor, and I’m always so thankful to get to talk to her about crosswords or anything else. Hope you enjoy our “fine” effort here!
Things I learned:
Random thoughts and interesting things:
Geography review:
This puzzle is fine - no, really, IT'S FINE! It's actually more than fine - it's delightful! As you can tell from their notes, Brooke and Matthew obviously enjoy constructing together, and it shows through in their puzzles. There are many benefits to solving crossword puzzles, including exercising your brain, and increasing your knowledge. But basically, most of us solve puzzles because they're fun! I am grateful to Brooke and Matthew (as I am to all constructors who share notes on the blog as its obviously optional!) for giving us a peek into the fun they have while constructing. As Brooke mentioned in her notes, their first co-constructed puzzle was titled IT'S LIT! When their second puzzle was titled, IT'S MAGIC! I told Matthew and Brooke via Twitter that I expected all of their future collaborations to feature exclamation points in the titles. Although I take no credit for inspiring today's title (I'm aware it was probably already in production at the time of my tweet) how fun to not be disappointed! Matthew even provided me with a delightful graphic to include in the blog about their first three collaborations: 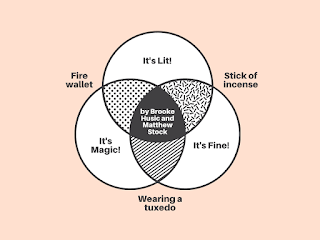 In addition to the solid theme answers and enjoyable cluing, I liked the answers ARE WE ON? and CAN'T YOU SEE! Also, when I was listing the theme answers above, I had the thought that PRINT MEDIA often contains FINE PRINT, but a DINING HALL is not always an example of FINE DINING. This puzzle was a lovely way to start my Thursday morning.
Brooke Husic Matthew Stock