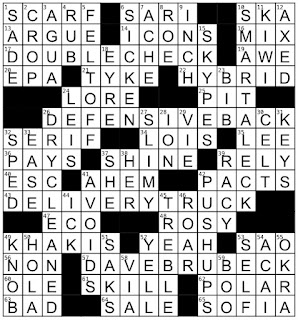 Theme Answers:
DOUBLE CHECK (17A: Reverify)
DEFENSIVE BACK (26A: Football player covering a wide receiver, often)
DELIVERY TRUCK (43A: USPS vehicle)
DAVE BRUBECK (57A: "Unsquare Dance" composer)
Theme synopsis: Each theme answer either begins with D- and ends with -ECK, or begins with DE- and ends with -CK. Therefore, the interior letters of the theme answers CUT THE DECK.
And now a word from our constructors:
Evan: Brooke developed the theme answer set of 11/13/13/11—which was fairly restrictive in terms of layout—but the results were nice. This grid only required four K’s, which promised to be tricky to work around, but why not make it nine?? (It just worked out that way.)
Brooke: This is the second of many Husic + Kalish collaborations! Evan was one of the first friends I made in the crossword community and, like he says, we're a great puzzlemaking team. I'm always impressed with his gridwork, fill cleanliness, and overall passion for the craft. Evan definitely gets the assist with 37/38-Down.
Things I learned:
Random thoughts and interesting things:
It's fun to see the results when constructors collaborate. I enjoyed this Husic/Kalish creation and look forward to more.
Brooke Husic Evan Kalish