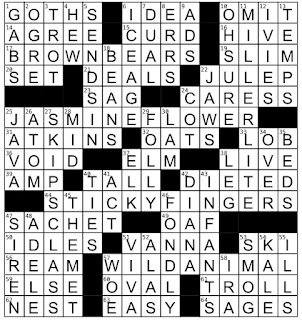 Theme Answers:
BROWN BEARS (17A: Kodiak and grizzly, e.g.)
JASMINE FLOWER (25A: Fragrant blossom used in some green teas)
STICKY FINGERS (44A: Tendency to steal)
WILD ANIMAL (57A: Undomesticated beast)
Theme synopsis: The first word of each theme answer - BROWN, JASMINE, STICKY, and WILD - is a type of RICE. These four words all appear in the left SIDE of the grid, providing us a crossword with a SIDE OF RICE.
Things I learned:
Random thoughts and interesting things:
Geography review:
For the second day in a row, I appreciated the use of the placement of the theme answers to add an extra layer to the theme. JASMINE FLOWER in the singular felt awkward to me, but it did lead me to discover that JASMINE FLOWER is the name of a song that has sometimes been used during Olympic events. I don't normally begin my day with a SIDE OF RICE, but this puzzle was an enjoyable way to do so.
Zhouqin Burnikel