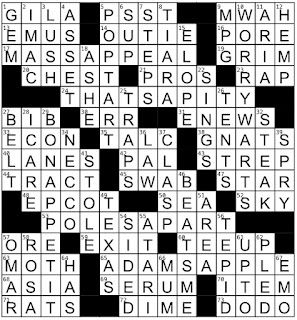 Theme Answers:
MASS APPEAL (17A: Something pop culture has)
THAT'S A PITY (24A: "Real shame!")
POLES APART (53A: Highly divergent)
ADAM'S APPLE (65A: Lump in the throat)
Theme synopsis: Each theme answer contains the letter string S-A-P spanning multiple words. SAP collected from trees or plants becomes SYRUP when concentrated.
Things I learned:
Random thoughts and interesting things:
Geography review:
No sticky spots in this puzzle, in spite of its high SAP content. You could say this puzzle flowed as smoothly as SYRUP. You doubt my jokes will have MASS APPEAL? THAT'S A PITY! Okay, I'll stop now. This was an enjoyable puzzle. WORRY WARTS and BON APPETIT were nice bonuses, as was BEATS ME.
Zhouqin Burnikel