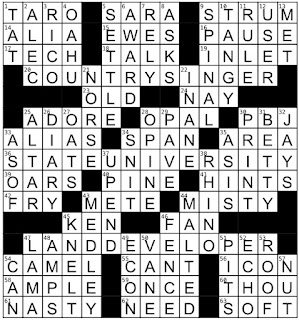 Theme Answers:
COUNTRY SINGER (20A: Mickey Guyton, for example)
STATE UNIVERSITY (36A: Alabama A&M, for example)
LAND DEVELOPER (47A: Professional with a civil engineering degree, perhaps)
Theme synopsis: The first word of each of the theme answers is a synonym for NATION - COUNTRY, STATE, LAND. Taken as a whole, each theme answer describes someone or something that is an INTEREST of a NATION. I feel like I'm not explaining this well, and perhaps there is a layer of theme I am missing. Feel free to comment or contact me and share your thoughts on the theme!
Things I learned:
Random thoughts and interesting things:
Geography review:
As mentioned above, I feel like I might be missing a layer of the theme here. Even so, the puzzle was an enjoyable solve, with lots of the inclusive cluing and answers that the USA Today crossword is becoming known for. A delightful start to the week.
Mark McClain