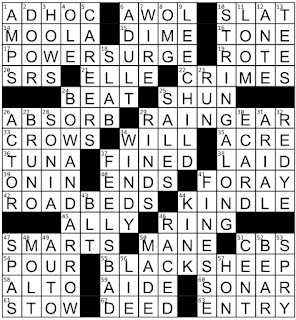 Theme Answers:
POWER SURGE (17A: Spike in the electrical current)
BLACK SHEEP (55A: Disreputable member of the family)
STRING ALONG (10D: Give false hope to)
BOW AND ARROW (24D: Archer's equipment)
Theme synopsis: The first word of each theme answer is a kind of TIE: POWER TIE, BLACK TIE, STRING TIE, BOW TIE.
Random thoughts and interesting things:
There wasn't anything in this puzzle that was completely new to me. That doesn't happen often! As a result, this puzzle was a pretty smooth solve for me. It's okay to have a puzzle like that occasionally.
Gail Grabowski