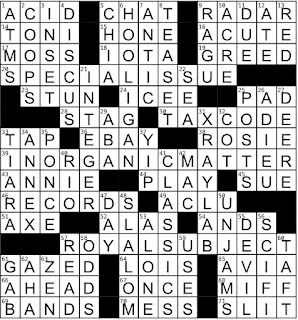 Theme Answers:
SPECIAL ISSUE (20A: Collectible magazine)
INORGANIC MATTER (39A: Stuff that's neither plant nor animal)
ROYAL SUBJECT (57A: Person living under a monarchy)
Theme synopsis: The last word of each theme answer - ISSUE, MATTER, SUBJECT - is a synonym for TOPIC.
Things I learned:
Random thoughts and interesting things:
Geography review:
This puzzle was a smooth solve for me. It was one of those rare times when, upon reviewing the puzzle, there were some Down clues that I hadn't seen because I had completely filled in the answers from the Across clues. For categories in this theme type, the goal is for the synonym words to change meaning when in the theme answer phrases. This puzzle's theme did that, with ISSUE, MATTER, and SUBJECT having meanings different than TOPIC when used in the phrases SPECIAL ISSUE, INORGANIC MATTER, and ROYAL SUBJECT. It's a nice, interesting set of seemingly unrelated theme phrases. An enjoyable Friday morning solve.
Patrick Jordan