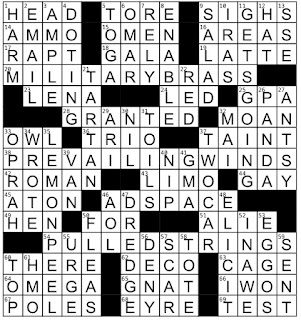 Theme Answers:
MILITARY BRASS (20A: High-ranking officers)
PREVAILING WINDS (38A: Easterlies, e.g.)
PULLED STRINGS (54A: Used one's influence to gain an advantage)
Theme synopsis: The last word of each them answer describes a section IN THE ORCHESTRA: BRASS, WINDS, STRINGS.
Things I learned:
Random thoughts and interesting things:
Geography review:
IN THE ORCHESTRA, one finds instruments from different families, including STRINGS, BRASS, woodWINDS, and percussion. I miss the presence of the percussion in today's theme set.  I recognize the difficulty in finding a phrase incorporating the word percussion. Perhaps percussion instruments could have been interspersed in the puzzle as bonus theme answers? It's a minor thing, and I still enjoyed the puzzle. With the exception of the SALAD clue, it was fairly straightforward.
Gail Grabowski