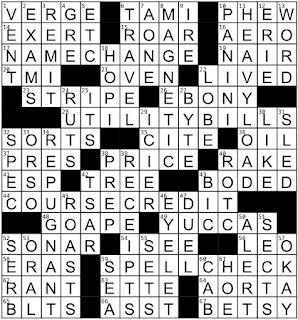 Theme Answers:
NAME CHANGE (17A: Reason to get a new ID card)
UTILITY BILLS (28A: Some monthly mail)
COURSE CREDIT (44A: Unit counted for graduation)
SPELL CHECK (59A: Typo-catching feature)
Theme synopsis: The last word of each theme answer denotes a method used to PAY UP: CHANGE, BILLS, CREDIT, CHECK.
Things I learned:
Random thoughts and interesting things:
Geography review:
This puzzle's straightforward category theme was elevated by the bonus theme answers. NAME CHANGE and SPELL CHECK were my favorite theme entries. SPELL CHECK and I have a complicated relationship. I'm grateful for the times its saved me from embarrassment, but wish it would read my mind and know when to leave my typing as is! The answers I didn't know today were all names, but they had fair crossings and I was glad to learn about these people. Speaking of names, I've come to associate Lynn Lempel's name with smooth, enjoyable crosswords. Today was no exception.
Lynn Lempel