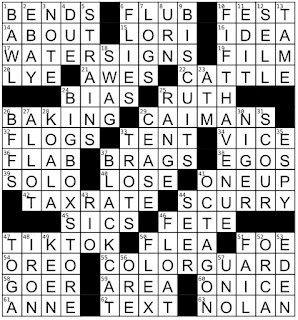 Theme Answers:
WATER SIGNS (17A: Scorpio and Pisces, in astrology)
COLOR GUARD (55A: Marching band accompaniment)
FIFTH AVENUE (10D: Candy bar named for a Big Apple thoroughfare)
BIG BOX STORE (24D: Large retailer)
Theme synopsis: The first word of each theme answer can be placed in FRONT of the word WHEEL to form a common phrase: WATER WHEEL, COLOR WHEEL, FIFTH WHEEL, BIG WHEEL.
Things I learned:
Random thoughts and interesting things:
Geography review:
I admit that I struggled a bit more with this puzzle than usual. At first I had WAIL instead of BAWL (1D: Cry loudly) and WOWS instead of AWES (21A: Bowls over), making the northeast corner a challenge. Sometimes you just aren't on the same wavelength as the puzzle. That's okay, if I didn't enjoy being challenged, I wouldn't be working crossword puzzles! I particularly appreciated learning about RUTH E. Carter, ANNE Braden, and National BLACK CAT Day.
Susan Smolinsky Zhouqin Burnikel