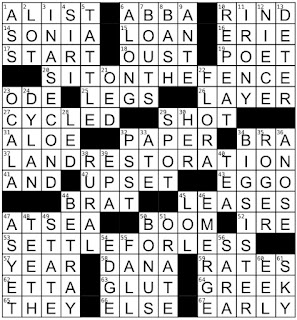 Theme Answers:
SIT ON THE FENCE (20A: Avoid making a decision)
LAND RESTORATION (37A: Ecological revival)
SETTLE FOR LESS (53A: Compromise on your expectations)
Theme synopsis: The first word of each theme answer - SIT, LAND, SETTLE - is a way to COME TO REST.
Things I learned:
Random thoughts and interesting things:
Geography review:
A straightforward theme and puzzle for a smooth, fun solve.
If you have tried to comment on the blog and been unable to do so, check out the information about this issue on my contact page. If you can't get the comments to work (I'm sorry!) feel free to reach out in other ways. I'd love to hear from you!
A Crossword Short Story:
This morning my cat, Willow, was walking all over me, my desk, and my keyboard. I told her she needed

to SETTLE down, find a place to LAND, and SIT down. Finally, she chose to COME TO REST on my lap, draped over my right arm. Any typos this morning are her responsibility.
Gail Grabowski